The City of Tuscaloosa Fleet

This right here is a story (one of many) of everyday heroes. The city fleet took a hard hit from this storm, as you can see in the photos. Most vehicles sustained significant damage. In the weeks after the storm, it was not unusual to see police cruisers patrolling with taped plastic in place of rear windshields. But there was cleanup to be done, and anything that would roll on it’s own power was out there. It was an extreme situation, and these guys rose to the challenge, and drove those beat-up trucks around. Later, I heard rumors that, because the fleet had been used in this condition, the insurance company was dragging their feet and saying they didn’t want to pay because maybe this damage wasn’t tornado damage, maybe it happened after the storm. Shame on those guys. I heard a lot of stories about insurance companies after the storm, and…shame on those guys. (Read your own policies very carefully, because there are things in there designed to give insurance companies a way out of paying you what you deserve after a disaster. Just sayin.) 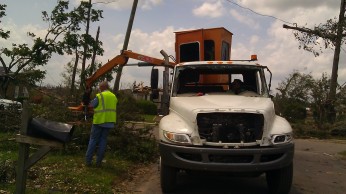 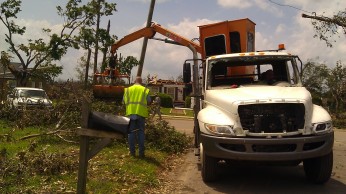 Nucor Steel company had bought 200 generators to pass out to employees and their relatives. I had a co-worker whose husband worked there, and there was one generator left, it was missing a few parts but still worked, and they asked did I need it. By golly, yes, I definitely needed it. They wanted to bring it to me, and I told them I would drive out of the zone and meet them in a parking lot and lead them in. This was frustrating to them, because they did not understand why they could not just drive to my house. I insisted, and tried to explain, you really can’t just drive to my house. It’s really not possible, because local driving conditions are not…normal. I can’t give you directions over the phone, it just doesn’t work like that anymore. There are no street signs. No landmarks – only piles and piles of debris. Roads are randomly blocked, sometimes 5 minutes, sometimes hours, without warning. You can get trapped, stuck, turned around, and lost. Checkpoints. You won’t make it. They finally agreed to meet at the bank and follow me in.

When we finally made it to my house, their faces were pale with shock, and they agreed they would not have made it on their own. The first few blocks after the checkpoint were about what you might expect after a tornado, trees down, plenty of damage, but as soon as you came over the hill and could see the lake it was a whole another level of queasy armaggedon. Seeing it with your own eyes was a surreal and completely disorienting experience that nothing could prepare you for. Being all the way in the zone was…humbling.

They finally unburied the Honda. 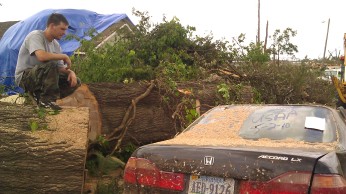 One of the chainsaw guys, after they finally cleared the tree off the Honda in front of my house.

The view from my porch on May 2nd.

Everybody had to go through these checkpoints to get into Forest Lake.

My bike light duct taped to my porch.

My bike light duct taped to my porch, as viewed from the road. My way of letting the National Guard patrols know somebody is staying here.

The problem with the generator was, it was loud. At night, very loud. No trees to block the sound, so it was extremely loud. After I got it, I wasn’t too keen to use it a lot, because I didn’t want the looters to come. So I only used it when absolutely necessary. Such as, to make coffee in the morning, or to charge batteries.